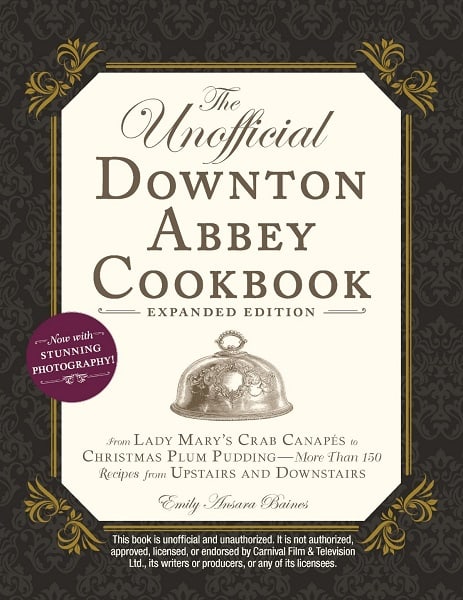 Fans of Downton Abbey pay heed…the 2019 expanded edition of The Unofficial Downton Abbey Cookbook is now available, just in time for the upcoming release of the movie (September 20, 2019). As you may already know, the wildly popular television series Downton Abbey chronicled the life of the wealthy Crawley family, owners of a large estate in the English countryside, and their servants during the early 20th century. Even those who are not fans of the show will be enchanted by this collection of more than 150 recipes highlighting the dishes and customs that were popular in England during this era.  Authored by professional baker, caterer, and writer Emily Ansara Baines, it is presented into two parts – “Upstairs” and “Downstairs”. Part 1 serves up recipes for the elegant dinners enjoyed by the aristocrats while Part 2 details the heartier fare that sustained the numerous staff who labored long hours each day tending to the needs of their employers and the enormous house and estate. Notes sprinkled throughout the book include interesting bits of history – Times Gone By, helpful menu planning ideas – Suggested Pairings, and imperative guidelines to proper behavior – Etiquette Tips. The author also entertains us with some humorous recipe titles and insights into the characters Downton Abbey fans grew to love – or loved to despise! This cookbook will appeal to everyone who appreciates a fine meal whilst exploring the customs and cuisine of an earlier, somewhat fairytale window in time.

Dinner was an event at Downton Abbey. Guests and family members alike expected a sumptuous meal and they were not disappointed. As was the custom at the time for wealthy families, the Earl and Countess of Grantham employed Service à la Russe, a French style of table service that consisted of an eye-popping number of courses. A butler and multiple footmen were needed to bring out the numerous courses, beautifully displayed on ornate silver platters. Wines were paired with each dish, selected with care and poured generously. Gentlemen wore tails (tuxedos were grudgingly approved in the late ‘20’s and thirties) and ladies wore evening gowns. Lasting several hours, this gathering was an opportunity to discuss world affairs as well as family matters with a bit of drama and intrigue thrown in for good measure.

Reviewing the typical dinner menu, it is difficult to imagine how the Crawley women maintained their slim figures. There were at least eight – yes, eight – courses! The usual number for Service à la Russe– which originated in Russia and quickly became very fashionable in Europe and England – was between eight and thirteen. Do not fear, the author is not promoting a gluttonous lifestyle! Ms. Baines’ recipes and tips for table seating and etiquette describe how to recreate a sophisticated and historic dinner party with any number of courses that match the tone and tastes of your guests. Or how to host a proper English afternoon tea. You may also choose a simpler recipe from the “Downstairs” section and treat yourself to a hearty Pork Pie or Mutton Stew at the end of your long workday.

The chapters in Part 1 follow the order in which courses were served, beginning with Hors D ’Oeuvres. Caviar and oysters were frequently served, giving the Earl and Countess yet another opportunity to flaunt their prosperity. Featured below is a recipe for Classic Oysters Rockefeller which is a nod to Countess Grantham, an American heiress whose fortune supported the Abbey. 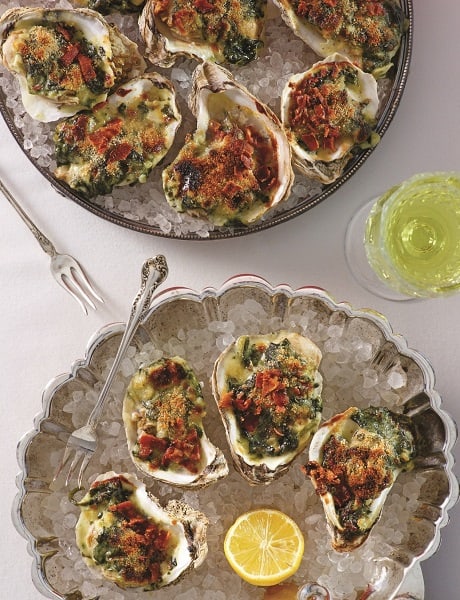 While John D. Rockefeller had nothing to do with this dish, it was named for him because he was the richest man at the time, and the chef, Jules Alciatore—who took the original recipe to his grave—wanted to convey the richness of the sauce. It is likely that the American Countess of Grantham would make sure that Mrs. Patmore had a reliable recipe for this beloved—and fancy—American appetizer, making it possible for the Countess to have a taste of home when needed.

While this recipe uses spinach, it’s well known that authentic Oysters Rockefeller obtains its green sauce without the use of spinach, but rather from a mixture of parsley, celery, and green onions or chives. However, nobody knows the exact ratio of ingredients, and this fact, along with the likelihood that the original Oysters Rockefeller contained absinthe (which this recipe replaces with Pernod), a liquor that is illegal in several areas, makes duplicating real Oysters Rockefeller nearly impossible. This recipe, however, is an extremely satisfying solution.

Once the nibbles and libations were enjoyed, it was time to be seated and begin the dizzying array of soups, fish, meat, and sweets. Here is the order in which they were presented:

But wait! That’s not all!  Often additional “removes” or “refreshers”, such as sorbet, were added in between the heavier courses. And it wasn’t unusual for cheese to be served with the fruit or before coffee and liqueurs.

Looking over this astounding array of food, you may be wondering what constitutes an entrée. Think Lobster Thermidor, Duck Confit, and Chicken Tikka Masala. Not exactly “light bites”. And when did you last see “Joint” on a menu or in a recipe title? Well, this category includes Stuffed Leg of Lamb, Mrs. Patmore’s Perfect Pork Roast, and Classic Beef Wellington. The author enlightens us that this dish was named either out of British pride by a very patriotic chef or after a 17th century duke. In French, it is Filet de Bœuf en Croute. 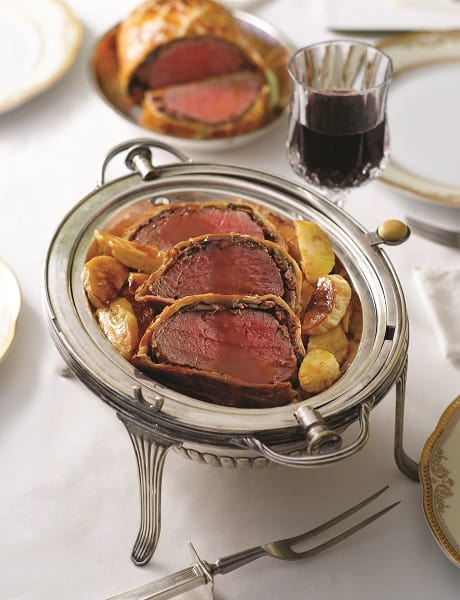 Depending on who you want to impress, you could call this dish by its French name, Filet de Boeuf en Croûte, or by its British name, Beef Wellington. Some claim that a rather patriotic British chef named this dish Beef Wellington out of British pride; others claim it is named after a seventeenth-century duke. Either way, this favorite—consisting of a solid filet of beef covered by pâté and surrounded by a pastry crust—would be a staple for many a dinner at Downton Abbey.

Although nowadays no one would look twice if you cut your meat into bite-sized pieces before eating, back in the nineteenth century and early twentieth century it was considered rude to do so. Rather, you were supposed to cut yourself one bite-sized piece of your meal, put down your knife, take a bite, then repeat. No wonder dinners took so long to finish!

After you have waded through multiple courses and wine pairings, losing count along the way, there still seems to be room for a bit of dessert. Here we have the recipe for Raspberry Meringue Pie, a twist on Mrs. Patmore’s ill-fated raspberry meringues. No spoilers here, you will have to watch the show to truly appreciate the irony. After sampling this cookbook, I predict you will either, a) rewatch the entire series or, b) watch it for the first time and understand why it is so well-loved. 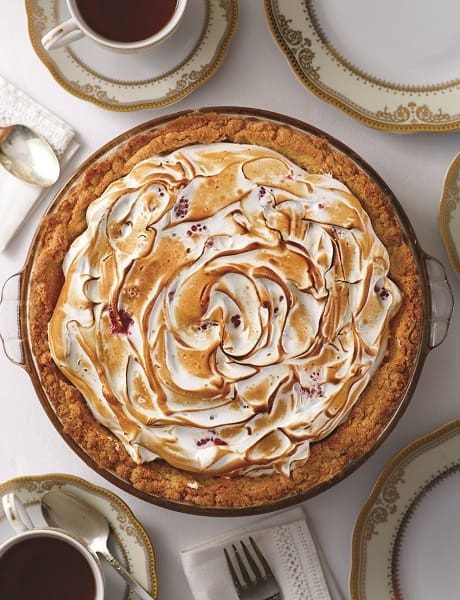 A twist on Mrs. Patmore’s ill-fated raspberry meringues, this is a light and fluffy dessert with a nearly shortbread-like crust, sure to engage even the pickiest of eaters…just be sure to leave off the salt topping!

Although Downton Abbey portrays the servants as all sleeping “downstairs,” in real stately houses—such as Highclere Castle, where Downton Abbey is filmed—the maids would sleep in the high floors above everyone else. In the event of a fire, it was the maids who faced the most peril, as there weren’t any fire escapes.

Dinner usually didn’t begin until eight so afternoon tea, served sometime between three and five, kept everyone’s appetite sated. Described as “an elegant snack”, it can be quite the feast. Included are several types of tea (tailored to the guests), finger sandwiches, scones, pastries, fruitcakes and perhaps an elaborate layer cake as the pièce de résistance!  O’Brien’s Crumpets look appealing for either for brunch or afternoon tea. If you have never served afternoon tea, perhaps they will be enjoyed at brunch. But what fun it would be to host a tea party! If you’re willing, this cookbook has you covered.

Part 2 is titled “Sustenance for the Staff” and trust us, they didn’t go hungry. While there were no eight-course meals, the food was hearty, tasty, and plentiful. True believers of the motto “breakfast is the most important meal of the day”! In addition to eggs and potatoes one could feast on kippers, boiled beef tongue, black pudding (also known as blood pudding), traditional porridge, and even baked beans.

Servants rose early to prepare the house so a large meal before a long day of physical labor was a necessity. Once the fires were lit, the crystal chandeliers dusted, and the floors swept, it was time to wake the aristocratic members of the household and attend to their needs. Their next meal wasn’t until midday. Referred to as “dinner” instead of lunch, it was a formal affair. The staff stood around the table until the butler and housekeeper were seated. It was the largest meal of the day. Main dishes included Bangers and Mash, Yorkshire Pudding, and Corned Beef.

Supper was a more casual affair, served at the end of a lengthy workday. Afterwards, there were still evening chores to be done. The menu might include Shepherd’s Pie, Split Pea Soup, and a variety of leftovers from the “Upstairs” dinner. Sweets were customarily served with both dinner and supper and included Classic Vanilla Rice Pudding and Meatless Mince Pie as well as Pineapple Upside Down Cake for a Topsy Turvy World.

Wouldn’t it be wonderful to travel back in time and taste these recipes as they came out of Mrs. Patmore’s oven, prepared with ingredients grown in the estate’s gardens, orchards, fields, and farms? The Unofficial Downton Abbey Cookbook is a perfect way to travel back in time and pretend to be a lord or lady for a day, then a butler or ladies’ maid for an evening! Put on the kettle and nibble a few scones while browsing the many delightful choices it has to offer.

[author] [author_image timthumb=’on’]https://www.mycookingmagazine.com/wp-content/uploads/2016/10/lori-rodgers.png[/author_image] [author_info]Lori Rodgers – Lori’s passion for food and fine dining began at an early age. She started reading Gourmet at 8, and was fortunate to have a father who included her in his travels to cites across the US, often frequenting restaurants she had read about in the magazine. After studying hotel and restaurant management at FSU for two years and thoroughly enjoying the summer program in Switzerland, she graduated with a degree in International Business with a minor in Spanish. Lori owned and operated the family business, Bert Rodgers Schools of Real Estate for 25 years, indulging her cooking hobby by whipping up meals for family and friends on the weekends. She has two teenagers who have adopted a vegan lifestyle, adding a new challenge to Lori’s cooking repertoire. Lori recently sold the business and is embarking on a new chapter and new career, returning to her true calling, cooking and exploring the multifaceted world of food![/author_info] [/author]