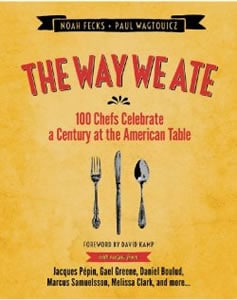 A new cookbook by Noah Fecks and Paul Wagtouicz is part American history and part recipes contributed by culinary celebrities such as Jaques Pepin, Marcus Samuelsson, Daniel Boulud, Gael Greene, Ruth Reichl, Jeremiah Tower and lots more because the book is 347 pages. The history is random and the recipes are, in general, long and complicated; yet, this tome will find a place on my shelf of culinary history books. The chefs are too important to ignore. Also, it interests me to see what dishes each chef associated with a specific event or decade of America’s past.

The book covers a century at the American table and there are 100 culinary personalities represented. They constitute the “We” in the book’s title, because very few of the recipes actually hint at what everyday Americans ate during the 20th century. These recipes, even the comfort food ones, are much too haute for that. Here’s an example of the format: The automatic pop-up toaster was patented in 1919 and was the design for the Toastmaster, capable of browning bread on both sides simultaneously. So chef Corey Cova gives us a recipe for sliced foie gras with buttered toast, made with blackberry-port mostarda (candied fruit), crispy pork and soft blue cheese. Judging from the ingredient list and directions, it takes about as long to produce this dish as it did Charles Strite to come up with the toaster. And the recipe demonstrates that the “we” eaters of early 1900s America don’t constitute the “We” of the book’s title.

A complete and accurate record of the 20th century is not foremost on the authors’ minds and in the forward of the book David Kamp explains, “…food and drink are so inexorably caught up in memory and, therefore, in specific time periods.  The curators of this book, Noah Fecks and Paul Wagtouicz, understand this…They have gone for culinary impressionism, taking the idea of a specific year and then inviting a chef or distinguished food person to translate that year into a beautifully realized dish or drink.”

That nicely worded disclaimer means that historical events or decades are really just pegs for the food celebrities to hang recipes on. But, though the history is skimpy, the recipes are generous. And really long. It may be more fun to read this book than to cook from it. The chef biographies are illuminating, their tips are useful (to an experienced cook) and the photos in the book are lovely.

Here’s an atypical recipe from the book. It calls for common ingredients, doesn’t take long to make, and sounds like just the thing to have with afternoon tea or to put out on your brunch buffet.

½ pound butter and a bit more to grease the pan

2 ounces almonds, blanched and finely grated or pulverized in a spice grinder

Preheat oven to 325. Grease a 9×5-inch loaf pan. Beat the butter and sugar until the mixture goes frothy. Stir in the egg yolks one at a time, then the flour, baking powder and almonds. In a separate bowl, beat the egg whites until stiff, then fold them into the batter. Transfer the batter to the loaf pan. Bake for 1 hour. Test with a toothpick and let cool before serving.