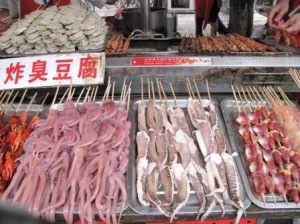 Flora and I recently traveled to Beijing and Guangzhou, China. Our business was all-consuming, thus we missed sampling a Michelin Star restaurant or strolling through a famous open-air market. We did encounter a few memorable eating and drinking experiences, however, that I feel obliged to share if the pleasures of the table take you to the Far East.

Our hotel in Guangzhou was awarded eight stars by one Chinese rating system, enough to merit its own constellation. The breakfast buffet, certainly, warranted high praise as the variety and quality of the fare was remarkable.

In a section featuring Japanese breakfast items I stumbled across the fermented soybean curiosity known as natto. Its flavor and aroma reminded me of damp gym towels. A barbecued pork bun fresh from the steamer, a warm bowl of noodle soup with Chinese broccoli, and a plate of sliced dragon fruit and pomelo sections made for a scrumptious chaser.

Street food sampling opportunities were few, yet I found a suitably intimidating-to-tourists candidate crammed into a busy side street serving a steady stream of locals, some of whom ate on overturned buckets at crippled tables bathed in harsh fluorescent light. Add drizzle, and one can imagine characters from Blade Runner lurking in the shadows.

I sheepishly approached and asked for whatever was the proprietor’s specialty. Since he spoke no English and I spoke neither Cantonese nor Mandarin, we agreed on futile gestures and long pauses to communicate.

I later learned that I consumed two helpings of “three types buffalo” — lung, tripe, and something my translator described the next day as a duct, all bobbing in broth the color of pencil lead and coal dust. Stir in a slightly sweet Chinese ketchup, soy sauce, and a hot condiment, strap on a blindfold, and enjoy. Who knows, the dish may become the next big hangover remedy.

On a trip to San Francisco’s Chinatown last year I discovered Pu’er tea, which is prized in China for its medicinal properties, not its flat, roasted-grain flavor. In Beijing, we learned that exported Pu’er tea is the product of bushes, not the tree that was the original source of Pu’er leaves. Because of the latter’s rarity it is harvested exclusively for domestic consumption.

Flora purchased two boxes of 18-year-old Pu’er “tree” tea as a gift to me. Accompanying documentation established its authenticity and touted its health value. To quote from the handsome red and gold booklet that I received in the packaging: “‘Pu’er tea tastes bitter, reduce the fat and the poisonous of cattle…cleans the intestines to help releases’ – Bencao Gammu Shiyi”. Try your Pu’er tea boiled briefly with a slice of fresh ginger.

Flora and I will cherish our memories of China, even the meals that we missed. Since rosemary is the herb associated with remembrance this month’s recipe is for rosemary squares. The source, Violet Schafer’s splendidly hippy Herbcraft, (San Francisco: Yerba Buena Press, 1971) may no longer be in print. Remember to look for a copy at your favorite used bookshop.

Beat eggs vigorously. Add sugar gradually, then vanilla and the flour that has been sifted with salt and baking powder and into which you have stirred the rosemary. Fold in nuts and fruits. Bake in an 8 x 8 inch pan that has been buttered and dusted with flour. Bake at 350 degrees for about 30 minutes. Remove from the pan while warm, cool and cut into bars.