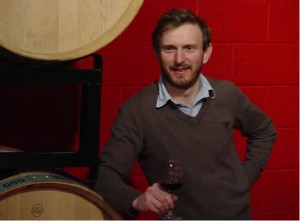 A few days in the progressive and lovely city of Richmond, Virginia, connects even the casual visitor with both contemporary America and our past. The once capital of the Confederacy where Robert E. Lee and Jefferson Davis lived and worshiped is now a showcase of modern lifestyles rich in cultural diversity. The American ideal – a vision with backbone – was proclaimed by two Founding Fathers: Patrick Henry speaking in an old church in downtown Richmond and the sacred words written by Thomas Jefferson.

And there are Virginia’s vineyards and all the splendid wines they produce. Everything relating to wine in America begins with Jefferson.

The wine cellar at Monticello provides a glimpse into the daily living and dining customs of one of the Founding Fathers. Thomas Jefferson not only described the basis for America’s legitimate claims to self-government in the Declaration of Independence, but his cellar and the bottles shelved there make the statement for the ages that this remarkable man was a champion of style and grace who placed entertaining right alongside farming, governing, architecture and law. Dining with fine wine was de rigueur wherever he lived.

Jefferson cultivated his love of the fine wines while living in Paris. Later, he advised America’s presidents about serving and pairing wines, often providing them with wines from his well-stocked cellar. One entry in his journal described an experience with Nebbiolo, a sparkling Italian Piedmont wine, as “superlatively fine.” His earlier introduction to Nebbiolo in Turin was remembered as “about as sweet as the silky Madeira, as astringent on the palate as Bordeaux, and as brisk as Champagne. It is a pleasing wine.”

Serving as the nation’s first ambassador to France, Jefferson lived comfortably on the Champs-Elysées and traveled to the vineyards of Bordeaux, Burgundy, Hermitage, Cote Rotie, Champagne, through Provence, into Italy, along the Italian and French Riviera, through Languedoc on the Canal-du-Midi, touring and tasting along the Rhine stopping off at famous German vineyards. The experiences assured that his dinner guests in Paris and later at Monticello and the White House would enjoy the world’s finest wines.

In his heart, Jefferson was a Francophile. In 1824, Daniel Webster noted that dinners at Monticello were “served in half Virginian, half French style, in good taste and abundance.” Dinner at Monticello was described by Jefferson’s granddaughter Ellen Randolph Coolidge as a “feast of reason,” where between sips and bites, ideas were freely shared and discussed. To minimize disruptions, to keep wine constantly available and to prevent bottles from being shaken by servants, bottles were resupplied by dumbwaiters used to bring undisturbed wine up from Monticello’s heralded cellar.

During the bicentennial of the Louisiana Purchase, I attended a seminar in New Orleans’ fabled French Quarter at the Cabildo where this land transaction was consummated. The lecture was about Jefferson’s favorite wines, particularly Bordeaux. Bottles were opened and poured from some of the Chateaux’ that Jefferson visited, a transcendent experience.

In Burgundy, Jefferson was enamored with Chambertin, Clos de Vougeot and Vosnee-Romanee and praised Montrachet the best white wine of Burgundy while maintaining a fondness for Meusault. Jefferson frequented the vineyards of the Rhone Valley and championed dry white Hermitage “marked with a touch of sweetness” that he called it the “first wine in the world without exception.”

This year begins the four-year observance of the Civil War Sesquicentennial, a magnet for Virginia tourism. The Virginia Museum of Fine Arts offers a stunning Picasso exhibit. Richmond’s fine dining shrines include Tarrant’s Café, Julep’s and Balliceaux, gourmet experiences equal to the best in Miami Beach and Atlanta. A culinary primer for a visit to Monticello includes breakfast at Richmond’s legendary Perly’s or lunch at Mitchie Tavern just down the road from Jefferson’s home.

Jefferson’s living wine legacy seamlessly combines with Virginia’s abundant fresh food and a tradition of heralded hospitality to form what American’s still claim as our right to pursue happiness.