Nothing is so delicious, warming and calming as a big mug of hot chocolate on a cold winter’s night. Even if you’re lactose intolerant, you can enjoy hot chocolate and there is every reason to make hot chocolate part of your winter routine. Sipping a steaming mug of this delicious and ancient brew calms the nerves, comforts the body and nourishes the soul.

There are so many versions and flavor additions to a basic hot chocolate recipe, that you can take this versatile drink from simple to splendid and never make the same recipe twice. By varying the proportions of chocolate to milk, you can also change the texture of the chocolate drink making it extra thick and rich. The hot chocolate at world-famous Angelina in Paris is almost the consistency of pudding and it’s served warm from a white pot rather than really hot. In Italy this thick hot chocolate is called cioccolate densa. The most wonderful thing about making your own hot chocolate (often) is that you can develop a signature house version, as well as experimenting with how hot chocolate is prepared and enjoyed in other countries. 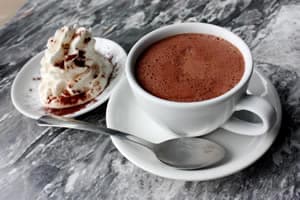 There is a difference between hot chocolate and hot cocoa, although most people use the terms interchangeably. Hot cocoa is made from cocoa, a powdered form of chocolate with practically all the fat removed. It is lower in calories. Cocoa powder was invented by a Dutchman in 1828. Hot chocolate is made with either sweet chocolate, unsweetened chocolate or semisweet chocolate. Chocolate is made from the dried, roasted and crushed nibs of the cocoa bean. It is processed and solidified into blocks used for baking. When making authentic hot chocolate, you first must melt a little block or square of solid chocolate.

Here are a few recipes to get you started. Remember that you can customize you house blend with the addition of flavors such as butterscotch, coffee, cinnamon, peanut butter, Nutella, or a variety of liqueurs if you’re making adult hot chocolate. In general, a pinch of salt generally intensifies the flavor of the chocolate and is a good idea. You’ll notice that two of the following recipes don’t use milk at all, proving that there is a hot chocolate for everyone on these cold winter nights.

Combine the cocoa and sugar in a saucepan over medium heat. Blend in the boiling water. Bring this mixture to an easy boil whisking constantly. Simmer and whisk for about 2 minutes.  Stir in the milk and heat until very hot, but not boiling. Remove from heat and add vanilla and sea salt. Divide between 4 mugs. Top generously with whipped cream and a sprinkle of cocoa powder.

Heat milk in saucepan over low heat until the milk begins to steam. Whisk in the sugar, cocoa powder, vanilla extract and salt until dissolved. Stir in the chocolate until melted. Remove saucepan from heat and allow to cool slightly. Beat the heavy cream in large mixing bowl with an electric mixer until stiff peaks form. Gently fold the whipped cream into the hot chocolate. Pour into warm mugs and sprinkle on some cinnamon (optional).

from Beard on Food by James Beard

Melt the chocolate in a saucepan (can be done in a warm oven rather than over direct heat). Add sugar to taste, then the coffee and then the milk. Beat with a whisk until the mixture reaches the boiling point. Pour into heated cups and serve with whipped cream and sprinkle with cocoa or cinnamon.

In a pot (off the heat), mix the hot chocolate mix, chocolate syrup, cinnamon, and chili powder. Pour in the milk. Add the boiling water and stir. Heat to desired temperature and pour into heated cups. Top with whipped cream or garnish with a cinnamon stick.

In a small saucepan, combine all ingredients and whisk over medium-low heat until the chocolate has melted completely and the mixture is steaming hot, about 5 minutes. Pour into warm mugs.

Combine all the ingredients into a saucepan over high heat, whisking until almost boiling. Pour into warm cups.