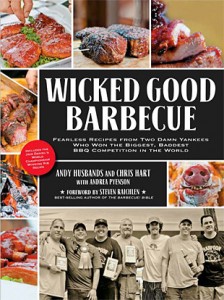 If you spend any time talking to a New Englander, someone who lives in the Boston area specifically, you will invariably hear the word ‘wicked’ used often. In a land where old time Puritans routinely torched and drowned citizens for being ‘wicked’ as in a witch, maybe that’s not so surprising. But, it’s the way the word is used today that makes it so much a part of the Boston linguistic landscape. Wicked means good. Very good. It’s a superlative as in, “that girl is wicked cute,” or “that lobstah roll is wicked tasty,” or “Stephen Colbert is wicked funny.”

Using the word as it is intended in the Northeast, champion cooks Andy Husbands and Chris Hart have put together a barbecue cookbook that prides itself on containing “fearless recipes from two damn Yankees who won the biggest, baddest BBQ competition in the world.” (The actual writer is Andrea Pyenson). The contest was the highly prestigious Jack Daniels World Championship Invitational Barbecue. Their book is Wicked Good Barbecue and the fact that Steven Raichlen (America’s high priest of fire) wrote the forward to this book should give you confidence to add it to your cookbook shelf and to use it often.

This cookbook is wicked audacious and between its covers are recipes such as Six-Day Bacon of the Gods, Seven-Layer Dip of Disbelief, Wicked Pulled Pork, Unyawn’s Cajun Napalm Parking Lot Gumbo, and Smoked Buffalo Turkey Wing Explosion as well as the Jack Daniels World Championship Winning Rib recipe. The authors are no amateurs. Andy Husbands is the chef/owner of the Boston South End neighborhood restaurant Tremont 647 and was a James Beard “Best Chef” semi-finalist. Husbands also competed on TV in the sixth season of Hell’s Kitchen with Gordon Ramsay. Chris Hart has dominated the competition BBQ circuit for the past 10 years and last year competed in Food Network’s inaugural season of Best in Smoke. His name is legend among barbecue devotees.

What I like about the book is that it’s a genuine primer with step-by-step instructions, tips for success, easy to follow directions and plenty of pictures that show technique and process. Some of the recipes, however, are long. You have to stay with the cooks all the way and pay attention. Give this cookbook to a beginner and he or she will be able to turn out respectable barbecue in a short period of time. Give it to veteran for the original recipes and for the fun of reading about barbecue competitions around the world. A word of caution – just about every recipe in Wicked Good Barbecue has about a zillion calories, the special kind that send your cholesterol soaring. But you probably guessed that.

Here’s a wicked tasty sauce to put on burgers that you’ve just grilled.

Andy Husbands serves it at his restaurant.

½ teaspoon sugar (or more to taste)

In a bowl, mix all ingredients together. Cover and chill. Before serving, taste to correct seasoning with sugar and pepper. This sauce will keep tightly covered and refrigerated for up to two months. The yield is  ¾ cup.