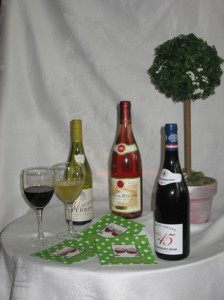 This scenario plays out in my world frequently: Four or six of us are at a restaurant browsing the menu. Each of us orders a different meal and then the wine list gets passed from person to person until it comes to rest at my place setting. Eyes are averted, chatter ensues among the guests. It’s obvious, I’m supposed to pick a wine that will pair well with say duck, seabass, roasted vegetables or a wild mushroom risotto. Actually, I know what to do. I go down the list on the wine menu and look for my “wines for all reasons.”

And what would they be? A number of American west coast producers know the answer because they formed a group a few decades ago known as the “Rhone Rangers.” Today that group includes more than 150 wineries, among which are Arrowood Vineyards & Winery, Chateau Ste. Michelle, Qupe, Tablas Creek, and Wild Horse. So what grapes are NOT included on this list? Think Chardonnay, Cabernet Sauvignon, Merlot, or Sauvignon Blanc. In other words, the Rhone Rangers are the contrarians.

What are the major grape varieties of the Rhone? Among the reds, Syrah is the premier grape of the Northern Rhone, while Grenache is most plentiful in the South, followed by Mourvedre and Cinsault. While among the leading white grapes are Viognier, Roussane, 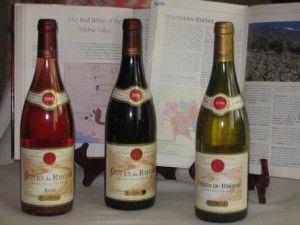 Marsanne, and Grenache Blanc. You are correct in thinking that a number of these grapes enjoy widespread planting “down under,” where Syrah is known as Shiraz.

Why would these wines be wines for all reasons, not to say seasons? Because they are inherently food friendly. My wife and I were in New Orleans for a wedding in May. While we were there, three of us stopped in for a dinner at Commander’s Palace – one of my all-time favorite restaurants. We all ordered turtle soup and then different varieties of seafood. In checking the wine list, the best choice at the best price point was a white Cotes du Rhone. It was compatible and satisfying with all of our meals.

At Bern’s Steak House in Tampa, Florida last Fall, we were a table of seven and I chose a (red) Cotes du Rhone that was four 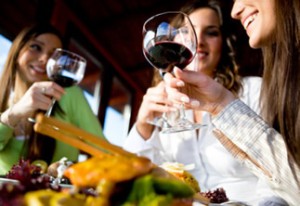 years old. It was very satisfying with an assortment of their excellent steaks. I noticed that Bern’s wine list included several Guigal Cotes du Rhone dating back to the mid-1980’s and asked the wine steward if they would be brick-like and unpalatable. He assured me that if they were, we wouldn’t be charged. Since Bern’s does not raise its prices on older wines, I opted to take that chance. It was surprisingly good. My conclusion was that it must have been cellared under ideal conditions. So, when you see a recommendation that a particular red should be consumed within three years of release, consider the conditions under which it has been held.

I would be remiss if I didn’t confess my admiration and preference for the wines of E. Guigal, especially their three varieties of Cotes du Rhone: white, red, and rose. Their 2006 red is composed of 50% Syrah, 40% Grenache, and 10% Mourvedre. Besides being the largest and most dependable producer, these Guigal wines can be found consistently in the $10-$13 range. The other major vintners making wine in the Southern Rhone are M. Chapoutier and Paul Jaboulet Aîné, whose wines are often excellent.

So, whether your favorite local restaurant serves steak or seafood, the wine menu should include wines from the Southern Rhone. If not, speak up.

1 thought on “Wines for All Reasons”