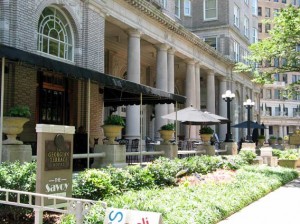 Atlanta – Many cities have at least one hotel culturally tied to the core of its people. This Deep South metropolis, in addition to being an arts, entertainment, sports and culinary center, claims one of the world’s most popular books and movies as its own, and both are historically tied to the regal Georgian Terrace Hotel.

2011 is the launch year for the Civil War Sesquicentennial, a four-year commemorative event that offers tourism and vacation opportunities from Florida to Pennsylvania. Gettysburg, according to The New York Times (Travel, May 1, 2011), expect upwards of three million visitors in 2013, and my little city of Stone Mountain, just outside Atlanta, with its massive Civil War park expects to vastly increase attendance that already averages five million per year.

History is a big part of this, but in key cities like Tallahassee, Atlanta, Charleston, Savannah, Nashville, Richmond and Washington DC, there are many other places to visit, wine and dine and relax. State and local tourism officials know this and are telling the world almost daily to come and stay for a while.

The Battle of Atlanta was a pivotal part of the Civil War and the novel “Gone With The Wind” now in the 75th anniversary of its publishing, is closely associated with Atlanta. The venerable and elegant Georgian Terrace Hotel here is directly linked to much of this. A tribute to “Gone With the Wind” author Margaret Mitchell, is planned along with events commemorating memorable milestones from this hotel’s first 100 years.

On December 15, 1939, the Georgian Terrace hosted the reception after the world premiere showing of the movie “Gone With the Wind,” attended by the foremost celebrities of the day: Clark Gable, Carole Lombard, Vivian Leigh, Laurence Olivier, Olivia de Havilland, Claudette Colbert, Victor Fleming, Louis B. Mayer and David O. Selznick. It was a global event and a permanent jewel in Atlanta’s crown as the cultural epicenter of the New South.

During this year, the Georgian Terrace is celebrating these milestones. Monthly events began in the spring with ballroom dance galas. This summer, the hotel will host the premiere of the widely anticipated public television documentary: “Margaret Mitchell-American Rebel.” Ms. Mitchell, first and foremost a journalist, was widely admired for her independence, irreverence and devotion to a Bohemian lifestyle. While still at the pinnacle of her fame, she died after being struck by a taxi while crossing Peachtree Street, her residence address for years, where the Georgian Terrace faces and where all the celebrations were held at the unveiling of “Gone With The Wind.”

The hotel was the birthplace of Arthur Murray’s dance studios. While a student at nearby Georgia Tech, Murray began teaching ballroom dance in this hotel’s magnificent grand room, earning big bucks and going on to become a name synonymous with American-style dancing. During this year, the hotel is offering ballroom dance evenings as a tribute to Arthur Murray.

Today, any number of celebrities such as George Clooney, Julia Roberts, Sir Elton John, Hank Aaron, Paula Deen and Betty White can be seen in the lobby and dining at Livingston’s, the hotel’s gourmet restaurant.

The elegant Georgian Terrace is on the National Register of Historic Places.

Stir and garnish with lime slice

1 thought on “With Scarlett and Rhett in Atlanta, Historic Hotel Celebrates its 100th year”