When my friend Stewart Stearns retired from a long and illustrious career as head of our local community foundation, he surrendered to the serious surgery he had been putting off. While he was recovering (and dealing with the attending boredom of healing), another friend and fellow foundation professional visited him and suggested he organize his recipes and do something with them.

He thought the idea idiotic. But, days passed and his reading list dwindled. TV and music failed to entertain and about two weeks later his daughter called from Colorado wanting a family recipe she couldn’t locate. In fact, she wanted a few. Stew, an adventurous cook and a world traveler, found the recipes she asked for and began to revisit his friend’s idea of collecting all his time-tested recipes and doing something with them.

Long story short, Stewart wrote a cookbook. He included besides his family recipes, photos of friends and family and a short paragraph accompanying each recipe about its origins along with tips for success when making the dish. What Stew realized when his book was about to go to press was that he had written an autobiography, a genealogy, travel log, a love letter to his wife Marji and their two children, and a homage to the places and people that contributed to his event-filled life.

He complied his spiral-bound, full-color book with a computer program that did the layout, inserted the photos he scanned in, supplied a cover and a table of contents. This self-published effort cost Stewart $500 for 50 copies. He called his book La Vida es La Comida (Life is Food). He gave his book to family and friends this year as a holiday gift. Now it turns out he doesn’t have enough. Friends of his friends saw the book and asked to buy a copy. Other people contacted him and asked how he did it because they want to do it too. Stewart used a software package from The Cookbook People (cookbookpeople.com), but there are other available sources to explore online.

Bottom line, you can produce a family cookbook too. And you should. If you love to cook and have a tantalizing supply of family recipes, gather them up. If you have stories to go along with the recipes and photos you’ve saved over the years, and good tips for home cooks, then there is every reason to compile your own original cookbook.

So many of our most cherished memories are made at the table and in the kitchen. As you begin this new year, make 2012 a time of organizing your recipes and recollecting the times you shared with others eating the food from your kitchen. I bet there’s a cookbook in you just waiting to emerge. Here’s a recipe to try from Stewart’s captivating cookbook. 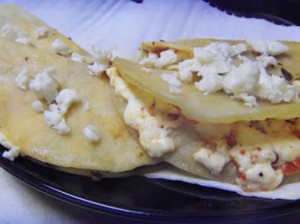 (“When we lived in Guatemala, this was one of the first authentic Guatemalan dishes we learned about. We prefer cheddar cheese when we make it at home in the US today.” Stewart Stearns)

Mix cheese, pepper, onion, black pepper and salt together. Put 1 heaping tablespoon of the cheese mixture on the lower half of a tortilla and fold over to make a half-moon shape. Press lightly. Heat oil in a skillet and fry until crisp on both sides. Drain on paper towel and serve warm.