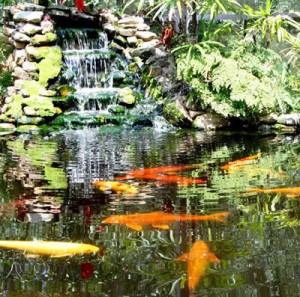 Should your garden have a Koi pond? But aren’t Koi only found in Asian restaurants jammed into a tacky corner pool with plastic plants? Or on some mega-estate that has plenty of room for a huge pond? And not in your backyard? Well, not so fast Pisces.

My friend Carl is locally famous for his swimming-pool sized Koi habitat and watching his fish got me interested in carving out a modest pond for these vivid multi-colored creatures in my back yard. Just so you know, Carl’s Southwest Florida pool is 19,000 gallons, 42 inches deep and with two, yes two waterfalls. And lush vegetation. The three-pump circulating system filters his water five times in 24 hours.

Ok, Carl is a fish fanatic. But, his passion is contagious and, best of all, he routinely gives away young fish to aspiring Koi groupies. Swim on.

Carl’s big pond is constructed for correct Koi comfort. Pool specifications are 10 gallons per inch of fish and 250-square-inches of surface per 30-inch fish. Carl’s pool walls are rubber lined to prohibit bacterial growth and he uses a bio-mechanical filer, best for his climate. Note: other climates, other filters.

There will be a quiz tomorrow so make notes. Carl’s Koi Hotel has a 50 fish maximum. Right now he has 35, several of whom he’s raised from egghood. Each has a name. Though they don’t say much, they are quite animated.

Need a little more background before you take the plunge with Cyprinus Carpio? As all you Latin scholars know, this is Latin for carp and Koi are in the carp family. No carp. I’m not kidding. 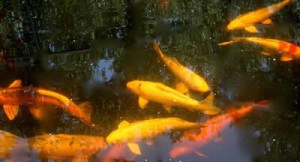 The origins of carp/Koi are a bit fishy, (Sometimes I am so witty.) Carp probably first appeared in the Caspian Sea. Later, in Asia carp were a food source. Possibly Chinese invaders brought the fish to Japan. Records show carp in Japan in 200 AD.

The Imperial Palace has housed one honored Koi whose every single day for the past 250+ years has been documented. Such a fish tale! If you read Japanese. And never you mind about those upstart Prussian carp that were bred into (pa-tooie) common goldfish!

The trend to breed koi as a hobby started at the 1914 Taisho Expo in Tokyo where the growers of carp for food from the Niigata province showed off their side hobby, brightly colored fish. And the fad was on! Koi-o-mania in Japan, spreading to the world.

Koi can be raised anywhere, Maine to Florida to San Diego. Northern Koi go into a state of rest all winter under the ice with a low (pretty much no), pulse. Koi can go six months without food. 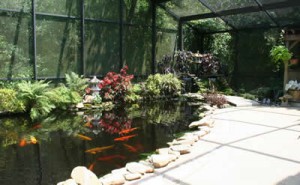 Feed Koi only what they can consume in three minutes and stop! No more. Once a day, a high protein food pellet (for brighter colors is the rumor). The algae that sticks on the side of the pond is their salad. (Who said watercress?) Some Koi species can grow to four feet long, maturing at about eight years. Then, weight gain shows up as a low slung tummy. They get taller but not wider!

Carl’s advice on how to start being Koi is this: Begin with a few fish. Water ratio to fish is important. Water balance is critical so keep the correct water specs. Don’t overfeed! And Leave ’em alone.

These fish can suck up money. Set up a trust fund to avoid having your kids be on the hook.