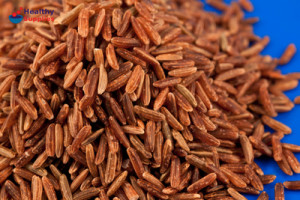 Europe’s largest river delta, the Camargue, lies south of Arles in France where the Rhône River empties into the Mediterranean. A nationally protected region since 1927, it is home to 400 species of birds, wild white horses, flocks of flamingos and black bulls with turned up horns. These bulls are raised for a specific kind of bull fighting during which the animal is not sacrificed but returns season after season the strut his stuff. You’ll also see in the Camargue vineyards, productive salt flats (this is one source for the coveted fleur de sel)) and mosquitoes so large and ferocious that they are feared far and wide.

The marshy part of the Camargue is where the unique riz rouge or red rice is grown and prized by both the local residents and tourists who always tuck a pound or two into their suitcases (we did last month while touring Provence). 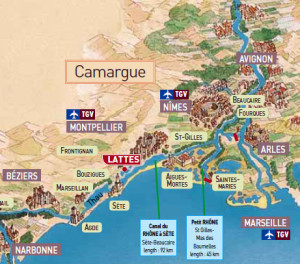 Rice in the Camargue has an interesting history, especially for Americans. It was after World War II that agricultural experts working under the direction of the Marshall Plan helped rice cultivation to become an industry in France. Today some 250 rice growers in the Camargue produce about 110,000 tons of rice a year. There are about 40 rice varieties grown, of which the red rice is the most famous and has become a signature product for the Camargue. Rice from the Camargue accounts for 30 percent of France’s rice consumption.

Riz rouge is fairly new variety cultivated in the Camargue wetlands. It is short-grained, unmilled and a bit sticky. It’s an anomaly because no one planned for the rice to be red. It just appeared. The taste is nutty and the texture is chewy. Local Provence chefs say that their riz rouge is best cooked when it is sautéed in a pan with a little butter or oil first. Then add

small amounts of water or stock until the liquid is absorbed. Repeat for the duration of cooking (about 40 minutes) until the rice is as soft as you want it to be. For one cup of rice, figure about three cups of liquid. Other home cooks have told me to put three cups of liquid in a pot and bring to a boil, add one cup of red rice, lower heat to a simmer, cover the pot and simmer for about 40 minutes. If the rice is the consistency you want and there is still liquid in the pot, pour rice in a colander and drain.

The French are famously touchy about American culture infiltrating and influencing their music, retail stores, language and restaurant scene (there are McDonald’s and Subway eateries all over Paris). And they are not shy about voicing their complaints. But in the Camargue people have nothing but good things to say about the Marshall Plan and what Americans did to improve French agriculture at a time when it mattered very much.

(from the cookbook Recipes From Provence by Rene Husson and Philippe Galmiche). You can buy red rice from France online or you can substitute wild rice for this recipe.

vinaigrette (bottled store-bought or your own)

Bring to a boil three and a half cups of salted water. Add the rice, thyme, bay leaf and one chopped onion. Let cook at a low boil for 30 minutes. Rinse the rice with cold water and drain. Remove the herbs. Cut the peppers lengthwise. Peel and seed the tomatoes and cut them into bite-size. Cut the remaining two onions into rounds. Mix the rice, onion, the raw vegetables and the olives in a salad bowl. Toss with vinaigrette and garnish with the anchovy filets.